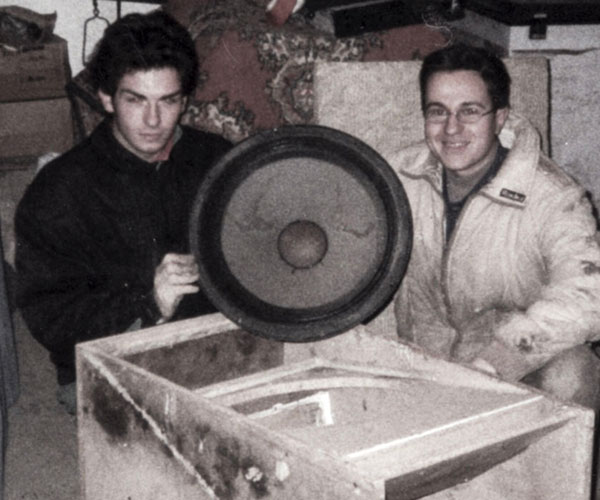 The Sound of Architectural Harmony

Garvan gives shape to the emotions of sound and music. Having its roots in the true passion for sound of its two co-founders, Garvan has succeeded in combining advanced acoustic technology and elegant, innovative design, thus creating a perfect mixture of aesthetics and performance.

Not only do Garvan products feature clean and essential lines, designed to convey a sense of elegance and modernity and to integrate into any kind of environment by adding a touch of exclusivity, they also deliver innovative solutions, the result of a painstaking research activity that has been opening up new opportunities in the field of flush mount systems and sound delivery.

2005 | Garvan Acoustic is born
Roberto Gaudenzi and Andrea Martelli are the founders of Garvan Acoustic. In the same year, the first collection of design loudspeakers was presented using fine finishes such as leather, stainless steel and noble woods. The Goccia speaker in its first version is already part of the first catalogue. The concept of  design speakers as “Acoustic Pieces of Furniture” was introduced immediately. This is a definition still used today indicating the Italian craftsmanship and the constant innovation characterising each of our products. The collaboration with Samuele Brunetti is a precious help to the internal organization and to start Garvan’s trade of products.

2006 | Garvan Acoustic innovates with flush to the wall speakers
From an idea of the Bartoletti e Cicognani Architecture Studio in Faenza, after almost a year of research and development, the first flush-to-wall speaker in the world is produced. It is included in the Garvan 2006 general catalogue update.

2007 | Fuori Salone, Milano
For the first time, Garvan exhibits his collection at the Fuorisalone in Milan, attracting considerable interest.

2008 | AD Architectural Digest / After Show
The pyramid-shaped acoustic speaker covered in pure leather SPE420 is published in a review of a prestigious installation in the AD Architectural Digest magazine.
Garvan Acoustic brings the music to the most exclusive environments in the after shows for: Zucchero Fornaciari, Vasco Rossi, Luciano Ligabue organized by Free Event.

2009 | Goccia speaker in Faenza ceramic
The Goccia loudspeaker is subject to restyling in a new version that includes the use of Faenza ceramic to create the cabinet and a new speaker. Thanks to its wide range of colours such as pastel, gold, copper and platinum, the new Goccia gives the possibility to create real works of art, born from the experienced craftsmanship of Roberto Gatti.

2010 | New partnership: Jacuzzi® and After Show
The collaboration with Jacuzzi® begins and Garvan Acoustic sets up their prestigious space acoustically at the Cersaie international fair in Bologna.
Garvan brings the music to the most exclusive environments in the after shows for: Black Eyed Peas, Muse, Luciano Ligabue organized by Free Event.

2011 | COR-TEN® effect / Top Design Award
Garvan Acoustic is among the first, if not the first, manufacturer of acoustic speakers using the COR-TEN® effect for its finishes; a special treatment with a material effect to the touch and a burnished colour that remains unchanged over time.
The Garvan SA113 outdoor loudspeaker wins the “Top Design” award at the Top Audio Video Show in Milan.

2012 | IBM / Turin Sports Museum / MSC Cruises / Lifetime Achievement Award to Ennio Morricone
The best avant-garde technologies in the audio-visual field were used for the construction of the IBM headquarters in Rome, and Garvan’s in-wall speakers were chosen not only for their high sound quality but also for their remarkable aesthetic value.
Garvan Acoustic in-wall loudspeakers bring sound to the works of art in the Turin Sports Museum, the first permanent exhibition space in Italy dedicated to sports memorabilia and the only museum in Italy housed inside a stadium, the Olympic Stadium in Turin.
Garvan Acoustic creates a series of customized loudspeakers for the new MSC Divina cruise ship “christened” by Sophia Loren. The work was carried out in collaboration with the architect Luca Mori of the De Jorio architecture studio.
Garvan had the privilege being technical partner of Soundtrack Stars, a Lifetime Achievement Award given to Maestro Ennio Morricone on the occasion of the “Luciano’s Friend The Talent Goes On” Memorial 2012 edition, setting up the location of the award ceremony with “Goccia”, the speaker in Faenza ceramics.

2013 | Launch of new 360 ° outdoor loudspeakers in Corian® / MSC Cruises / 70th Venice International Film Festival
Among the first if not the first speaker manufacturer to use Corian® material for the new collection of 360 ° outdoor loudspeakers.
Garvan manufactures a series of customized loudspeakers for the new MSC Preziosa ship “christened” by Sophia Loren. The work was carried out in collaboration with the architect Luca Mori of the De Jorio architecture studio.
Garvan was chosen as technical partner at the “Soundtrack Stars” award for the best soundtrack of the films in competition at the “70th Venice International Film Festival” 28th August> 7th September 2013 Venice.

2014 | Launch of SA210 and G-Bass ™ technology / “Leading Development” Award / Jacuzzi®
Presentation of the new SA210 outdoor loudspeaker with G.Bass ™ Technology resulting from Garvan research: use of a double loudspeaker loaded with transmission line for optimal low frequency response that does not require the use of additional subwoofers.
Garvan Acoustic is awarded among the excellent companies of the Province of Ravenna distinguished for economic growth, employment, innovation and quality.
From 8 to 13 April the fair Salone del Mobile returns to Milan where Garvan Acoustic is a partner of Jacuzzi®, the leading brand in the spa and bathroom sector.

2015 | Gresini Racing / International Film Festival
The Aprilia Racing Team Gresini, the Italian team involved in the MotoGP World Championship, has chosen the exclusive Goccia loudspeakers made by Garvan Acoustic to ensure the best acoustic quality within its hospitality, “home” to the team and its guests during the weekend of the Grand Prix.
Garvan was chosen as technical partner at the “Soundtrack Stars” award for the best soundtrack of the films in competition at the “72nd Venice International Film Festival” 2> 12th September 2015 in Venice.

2016 | Paris inaugurates «Viale dei canti» / Aldo Drudi D-Performance / Venice International Film Festival
Thursday 26 May 2016 in Rue de Grenelle in Paris, in the presence of a large audience and the Ambassador of Italy to UNESCO, Vincenza Lomonaco, the multimedia work Viale dei Canti is presented to the public. The mural graffiti stands next to the Italian Cultural Institute and reflects the fusion of the Italian arts and innovations. Italian is also the “musical secret” that gives life to the artistic installation: six invisible loudspeakers manufactured by Garvan are integrated into the wall, bringing to Viale dei Canti a high-quality music, composed by the internationally renowned composer Stefano Gervasoni.
Partner of the Burasca project created by the Romagna designer Aldo Drudi, famous for the graphics on the helmets of many two-wheel champions, first of all Valentino Rossi.
Garvan was chosen as technical partner at the “Soundtrack Stars” award for the best soundtrack of the films in competition at the “73nd Venice International Film Festival” 31st August > 10th September 2016 in Venice.

2017 | Launch of new in-wall subwoofers with G-Bass ™ technology
Presented at the ISE Amsterdam fair the new and innovative WIR series, flush-to-wall and plasterboard subwoofer with G-Bass ™ transmission that improves performance compared to a more traditional configuration with a very reduced aesthetic impact.

From 20 to 22 July, eighteen among Garvan Acoustic subwoofers and on-wall speakers have faithfully and authentically interpreted the powerful sound of the 4-cylinder Desmosedici Stradale engine of the new Ducati Panigale V4, at the Marco Simoncelli Misano World Circuit. On the occasion of Eicma 2018, Ducati relies on Garvan Acoustic to give visitors the experience of a Pure Italian Sound. Two SA225 speakers faithfully and authentically reproduced the powerful melody of the Ducati Panigale V4.

2021 | New products in the Garvan catalogue

Goccia loudspeakers are back on TV with the TV series “Ritoccàti!” and “Il Re del Bisturi”. SN120, the new outdoor loudspeaker is presented with reference performance in comparison with the current market.